A basic guide to urban basing

Since Warhammer 40,000 8th edition was released in June 2017, I've been slowly working on redoing my Imperial army - as well as starting a Nurgle force and looking at an Eldar one. One element I have been doing to unite the forces is themed basing - in particular, going with a ruined urban base look.

The technique is one that I learned from a friend of mine back in my days as part of the Sheffield Irregulars - he was painting units up to sell on eBay, and all the units he did used this approach. One of the things we did at events was talk people through how to make these bases, which is also where I learned it.

The one downside with doing these bases is they do take a little time to make - and if you're doing an army like Imperial Guard, Tyranids or Orks it can be tricky to justify the effort across so many models. Part of the reason it has taken me over a year to paint up a 30-man unit of Conscripts was putting off doing the bases for the last ten.

Playing a class you're not familiar with is an interesting experience in Diablo III - new mechanics and strategies become available, new pitfalls and traps become apparent, and you get to try out pieces of gear that you would previously have salvaged for the crafting materials.

This has certainly been the case as I've moved through the second half of Act I with my Crusader, HenryJonesJr - if you're interested in my thoughts on the first stage of my journey, they're available here.

I'd just defeated the Skeleton King when I last posted, having hit level 22. Before I picked up with pushing forwards with the storyline, I ran through Old Tristram Road a few times to try out the new spear I'd picked up, the Pledge of Caldeum. I was doing substantially more DPS than I had been, but I realised after a couple of runs that I was probably better going spear and shield than just straight spear, though it meant tweaking my passive skills so I had access to the Heavenly Strength skill, which lets me used a two-handed weapon in one hand.

Having settled my gear - and found Warriv, so I could grab his journal from his corpse to move me a step closer to one of my achievements - I was ready to move back into the story.

When I was at university, one thing I made sure I had time for was playing computer games. My genres at the time were real time strategy games and roleplaying games - as a general rule, you got a lot of play out of them, either due to skirmish modes or long storylines. As a result, I found myself playing and enjoying Diablo II quite a lot, tracking down runes and upgrading my gear, even if the story wasn't the strongest.

Fast forward to last year, and a friend of mine convinced me to pick up Diablo III during a sale. I'd resisted picking it up when it was first released, partly due to the "real money" auction house, and party because my PC at the time was not the most reliable. My current one, however, was able to run it without a problem, and we had a fun time over a number of evenings, playing through the game as a team.

Around Easter, after taking a break for a while, I started a new Demon Hunter, and tried to complete the initial four tiers of my Season 13 journey. As it happened, this Season finished while I was at UK Games Expo, and I was one task away from getting my final bits of free gear - curse my lack of DPS!

June 15 marked the launch of Season 14, and I'm determined to do better this time. I'm going to be doing a series of semi-regular posts chronicling my progress. This time, I shall not be denied - and maybe we'll see what lies beyond tier 4 as well.

An Interview with Oathsworn Miniatures

UK Games Expo is a great opportunity to meet the people behind your favourite games and model ranges, as well as to expand your horizons by finding companies you never knew existed and sampling their wares. This, of course, is not without risk to your wallet, but it's a risk worth taking.

This year, in addition to picking up a Kickstarter order, I thought I'd be a bit cheeky and see if Michael and Jo from Oathsworn Miniatures would be able to make a bit of time for an interview. To my surprise - and delight - they were happy to do so, so I caught up with them on Sunday afternoon, where the hope was that things would've died down a little. Compared to the Saturday it had, but that's not saying much...

If you aren't aware of who I'm talking about, Michael and Jo Lovejoy are the husband and wife team behind Oathsworn Miniatures, a UK-based miniatures company which produces the Burrows & Badgers game, alongside the Heroines in Sensible Shoes range of roleplaying game miniatures. I've spoken to them at events before, but this is the first time doing so as a "formal" interview.

Quick note - while I'm sure some of you would prefer to hear the recorded audio, there is that much background noise from the Expo that it isn't really suitable. However, what follows is the best transcription I could manage. Enjoy...

When talking to a gaming group about a new game, it can sometimes be really hard to find the "elevator pitch" - that sound-bite which immediately gives them a mental image of what it will be about, and ideally a little idea of how it'll play. This is not a problem with Burrows & Badgers, published by Osprey Games as a new edition of the rules created by Oathsworn Miniatures. Now in a full-colour hardback, describing the game to people as "Redwall: The Skirmish Game" instantly gets the concept across1 - and that's before they've even seen the miniatures.

If you've read my posts before2 - or watched my stream on Twitch - you'll know that I'm a big fan of the miniature line which accompanies the Burrows & Badgers game, but I hadn't really gotten around to reading the rules or playing it. However, earlier this year I committed to attending a Burrows & Badgers tournament at the end of June - and then I heard that the Osprey version of the rules, which I'd heard rumblings about for a while, would be out in time for Salute.

Thanks to the wonders of the internet, I was able to get a pre-order in place, and the fruits of that arrived this week - especially impressive given that I imagine Michael and Jo are still recovering from Salute, yet managed to get my order posted out on the Monday following it. So, without further ado, let's take a look at what came through, shall we? 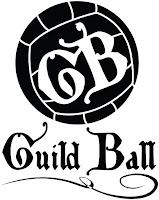 In early August, and probably in response to how Dark Souls has been received, Steamforged Games had to move to a bigger warehouse. As a way to celebrate - and I guess to clear out some older stock - they offered up a Guild Ball Mystery Box, which would provide a variety of items at a large discount, including two random six player teams.

I'm a fan of Guild Ball, even though it is a game I haven't played often enough - for a start, it is the only game where I can say I have a 100% win record against Jamie Perkins1. I've currently got two teams, in various stages of WIP, in the form of the Mason's Guild and The Union, and had my eye on the Hunter's Guild and Farmer's Guild2 down the line.

As a result, when the Mystery Box came up I was happy to take a punt on it - with eight Guilds on the market I hadn't bought into, I was in with a decent shot at getting ones I didn't own at this stage, which would give my collection some variety. The box turned up recently, so I figured people may be interested in whether it was a good move or not...

For those who played Legend of the Five Rings (L5R) - either the collectable card game (CCG) or the roleplaying game - September 2015 was a month that will live long in infamy. It marked the second occasion where the Alderac Entertainment Group had sold the license, this time to Fantasy Flight Games1. At the time, I described this as Jigoku achieving a victory, as the game would be on a hiatus for two years, while FFG developed their version of the game.

Fast forward two years, to September 2nd 2017. I'm writing this post while at the L5R Honored2 event, an invitational tournament for 100 players from across Europe. The day is being run by FFG as the official Europe launch for their version of the game, following its debut at GenCon. A group of us from Sheffield were asked to come down and help run the event - four Judges, and myself as Scorekeeper.

While I used to play the CCG earlier in its history, I'd stopped playing well before the sale of the license. I was still involved in the tournament scene by working as Scorekeeper as part of the event team at Patriot Games, which hosted multiple Kotei3 tournaments, and the 2014 L5R World Championship. I haven't played the new game at all yet, which isn't that surprising when the game hasn't been released yet.

Still, the chance to work at something like this, and make a good impression with the new people behind the game, is a powerful incentive, so our team travelled down on the Friday, doing battle with the Tube to make it to our venue by mid-afternoon. As a result, we got roped in with helping decorate, and retired to our rooms late in the evening.

An Interview with Oathsworn Miniatures

UK Games Expo is a great opportunity to meet the people behind your favourite games and model ranges, as well as to expand your horizons b...